Most scholars agree that the name, topaz, came from the island, Topazios (now Zabargad). This is because the very similar looking gem, peridot, was heavily mined there. However, a small group of scholars traced the etymology to the Sanskrit word for “fire”, “topas”/”tapaz”. Regardless of the origin of its name, this magnificent clear, yellow/orange stone was rumored to be able to break spells, cure lunacy, and dissipate anger. But leave it to those colorful Ancient Greeks to reveal its true power: the power to make the wearer invisible. Regardless of its supernatural abilities, Topaz has been revered since the times of the Pharaohs. Up until the metallurgical advances in the 20th century, it was assumed that all yellow, orange, and brown, transparent gems were topazes. 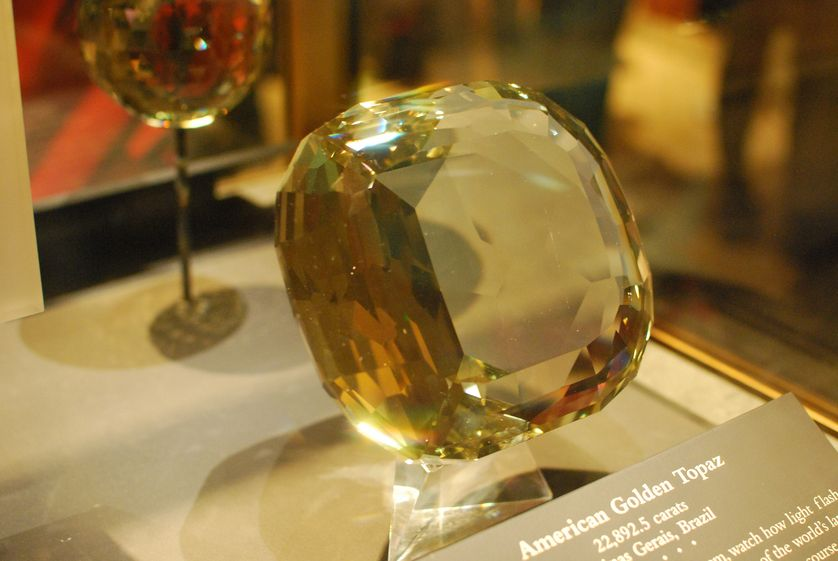 The largest topaz on record is the American Golden Topaz. It weighs in at a massive 22,892.5 carats (just over 10 lbs)! Unlike most other massive stones of high quality, you can actually visit this one as it is currently on display at the Smithsonian’s National Museum of Natural History.

The Most Famous Topaz is the Braganza Diamond. Wait, what?

The Braganza Diamond is a giant, clear stone weighing in at approximately 1680 carats. It clarity was so pure that for several decades after its discovery in 1797, it was believed to be a diamond. However, it has since been thought to have been a white topaz. It was given to the recently exiled Portuguese royal family after they fled from Napoleon’s forces in 1807 upon their arrival at their de facto capital in Brazil.

Firstly, as with any colorful transparent stone, this color will fade over time so it is best to store the jewelry in a cool, dark place when not in use. Coming in at a fairly impressive 8 on the Mohs Hardness scale, the topaz is fairly resilient but due to its atomic structure, it can be cracked if hit with enough force on the weakest points of the piece so handle it with care while you clean. It is advised that you don’t wear a topaz ring on your dominant hand so as to avoid unnecessary contact. For cleaning, soak the stone in a bath of slightly warm water and a mild soap for about ten minutes and use a soft cloth to scrub the stone clean and pat dry. While you are cleaning the piece, take note of any wear and tear (loose brackets, missing accent stones, etc.). Feel free to bring up any issues or questions when you bring your piece into our store for a more detailed cleaning. As always, our goal is to help you keep your most treasured pieces looking their absolute best.