The ruby is a beautiful red gem whose name derives from the Latin “ruber” which means “red”. Rubies are known as “ratnaraj” in ancient Sanskrit which translates to “King of Precious Stones” and, with their popularity over the last few millennia, it is certainly easy to see why. The ancient Burmese believed that the ruby would make them invincible and would often implant them under the skin. Hindus would often donate the rubies to Krishna upon the death of an emperor in order to ensure his reincarnation. The ruby’s deep red color is often referred to as “Pigeon’s Blood” (I assume there has to be a logical reason why this is). The ruby is called “tabtim” in Thailand- which means “Pomegranate” due to the ruby’s striking resemblance to the seed of the delicious red fruit. 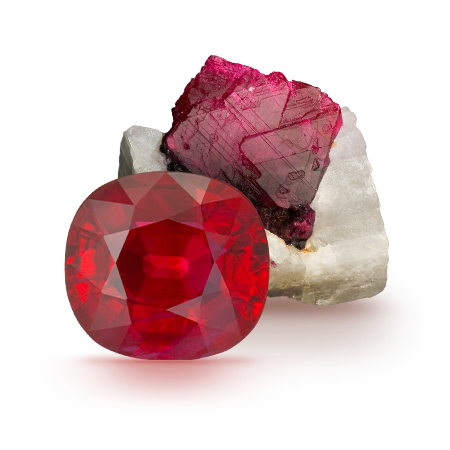 There have been some rather impressively sized Rubies throughout history. From Marco Polo’s tales of Kublai Khan trading a city for a large ruby to the massive 167 carat Edwardes Ruby, there have been massive rubies discovered the world over. If you want to see one of these massive beauties for yourself, you can see the 100 carat DeLong Star Ruby in New York City at the American Museum of Natural History or the 138.7 carat Rosser Reeves Star Ruby. There have also been amazing pieces of jewelry featuring the ruby as the centerpiece. On November 26, 2013, a necklace made with a combined 87.78 carat weight of rubies and diamonds sold for a whopping $6.4 million.

Coming in at an impressive 9 on the Mohs hardness scale, rubies are pretty resilient gems. You can wash your ruby jewelry in warm, soapy water and wipe it dry with a soft cloth. It should also go without saying that rubies (like every other precious gem) should be kept away from acids if you want to avoid doing irreversible damage to the color of the stone. While you are cleaning your piece, be sure to note any scratches, damages to the piece, or missing stones. When you bring your piece in for a professional clean, be sure to tell us about any issues or questions you might have. We here at Bishops want to help you keep your jewelry as beautiful as the day they entered your life.