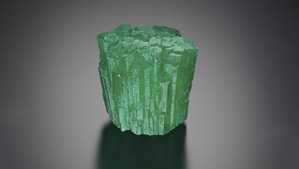 Coming from the on-the-nose Ancient Greek word, smaragdus (which translates to “green gem”), emerald has long been held in esteem by cultures worldwide. Due to its beautiful green color, it’s often associated with growth and spring (which is why it’s often named the birthstone of May). The deeper the emerald is in color, the more valuable it is. That lustrous green hue comes from the natural inclusions of chromium in the beryl crystal. This gorgeous stone has been found to be mined as far back as Ancient Egypt, with speculation that it may even predate that. Back in the 1960s, US jewelers decided to include beryl crystals containing vanadium in the emerald family. Due to this controversy, these emeralds are often referred to as Colombian Emeralds and are not allowed to be called emeralds in Europe. But none of this is as crazy as...

One of the world’s largest emeralds ever found, weighing in at a whopping 752 lbs (and 3 feet long), has had a crazy life above the Earth's surface. It originally comes from Bahia, Brazil (hence the name), and was currently being held in the United States while attempts were made for it to be sold. This is where it gets crazy. As the story goes, there was a tentative deal back in 2005 while the stone was being held in New Orleans. Unfortunately, the levees broke and the stone was left submerged and inaccessible so the deal fell through. It was then relocated to a secure warehouse in Los Angeles. While there, the stone was stolen. How they were able to get the 752 stone (roughly the weight of two professional offensive linemen combined) past the security at the facility is still debated but the stone was eventually tracked to a storage facility in Las Vegas. After re-securing the behemoth, the LA Sheriff's office has had the stone under lock and key at an undisclosed location since then. What's even more remarkable is that the stone doesn't even have a clear owner anymore. The most recent case awarded the United States custody to a holding company who proved that is was given as collateral in a deal that fell through. However, the judge refused to rule on any claims the Brazilian government might have.

Like most Beryls, Emerald clocks in at a rather impressive 7.5-8 on the Mohs Hardness scale. Since the stones are highly prized when they are darker in color, it is strongly advised you keep the stone away from heat- which can both discolor the gem and extend the naturally occurring fractures. Since there are natural fractures within the stones, it is strongly advised that you never use ultrasonic or steam cleaning on your gem as this will considerably compromise the gems. It is advised that you use a warm (not hot) soapy water and gentle scrubbing to clean your jewelry. As always, while you are cleaning the piece, make sure to note any damage or missing stones. Air dry your jewelry and store in a secure place when you are not wearing it. Every couple months, stop by our store for a free professional cleaning. While here, you can bring up any issues or concerns you may have about the piece. We here at Bishops want to help you keep your piece in the best condition it can be.